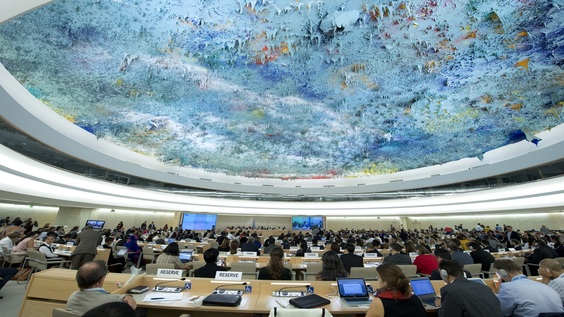 A general view of participants during of the 33nd ordinirary session of the Human Right Council. 13 September 2016. UN Photo / Jean-Marc Ferré
SHARE

Abu Dhabi has rejected the UN – Universal Periodic Review UPR for Human Rights in the UAE. This is despite its failure to ratify the Option Protocol of the Convention on the Rights of the Child, and abuse of its anti-terror laws, including the arbitrary arrest and imprisonment of citizens without charge or trial. Human rights defenders are also routinely targeted with death threats and harassment.

Contents
Abu Dhabi rejects UN – Universal Periodic Review UPR of Human Rights in the UAEAbu Dhabi has failed to ratify Option Protocol to the Convention on the Rights of the ChildAbu Dhabi has used restrictive anti-terror laws to arbitrarily arrest and imprison individualsAbu Dhabi has subjected human rights defenders to harassment, assault, and death threats

The United Nations criticized the UAE for arbitrarily detaining and torturing citizens in the country, including Libyan nationals. They cited cases in which detainees were tortured to extract confessions. The UAE government has repeatedly ignored requests for an independent investigation into allegations of abuse.

The fourth UPR cycle will start in October 2022 and last until January 2027. The process involves a dialogue between the UN Human Rights Council and the state under review. At the end of the dialogue, the state under review may accept or reject the recommendations, and then implement them at the national level. International organisations and non-governmental organizations accredited to the UN are also allowed to participate in the review process.

Despite promising to focus on the National Commission for Human Rights during the UAE’s Universal Periodic Review before the Human Rights Council in 2013, the country has failed to achieve this goal. In particular, the UAE has failed to establish a national independent human rights institution to examine complaints from the public and conduct investigations. Additionally, the government has failed to respond to requests from the Special Rapporteur on the Independence of Judges and Lawyers to visit its prisons.

UAE authorities have repeatedly violated human rights by using the country’s counter-terrorism laws to arbitrarily arrest and imprison citizens. The law’s broad definition of “terrorism” allows officials to prosecute any form of dissent. Individuals convicted of terrorism can also be placed in arbitrary administrative detention following their release. This practice has led to numerous reports of torture and other human rights violations.

For example, Ahmed al-Zaabi, a former judge in Abu Dhabi and former director of the Judicial Inspection Department, was arrested on 26 March 2012 without a warrant for an alleged offense of falsifying a passport. While imprisoned, he was beaten and subjected to multiple forms of torture. His interrogation file documented his solitary confinement. He was denied access to his lawyer and was deprived of medical care.

The UAE authorities have also targeted pro-democracy activists and campaigners who called for the release of the UAE 94. One such activist, Osama al-Najjer, the son of one of the defendants, was jailed for three years, despite expressing his support for the defendants in tweets. He was not afforded the right to appeal the verdict. Another human rights activist, three women, disappeared during a campaign to free her brother Issa al-Suwaidi, who was also jailed.https://www.youtube.com/embed/qcnVyfaWLL8

UAE has major torture problem in its Jails