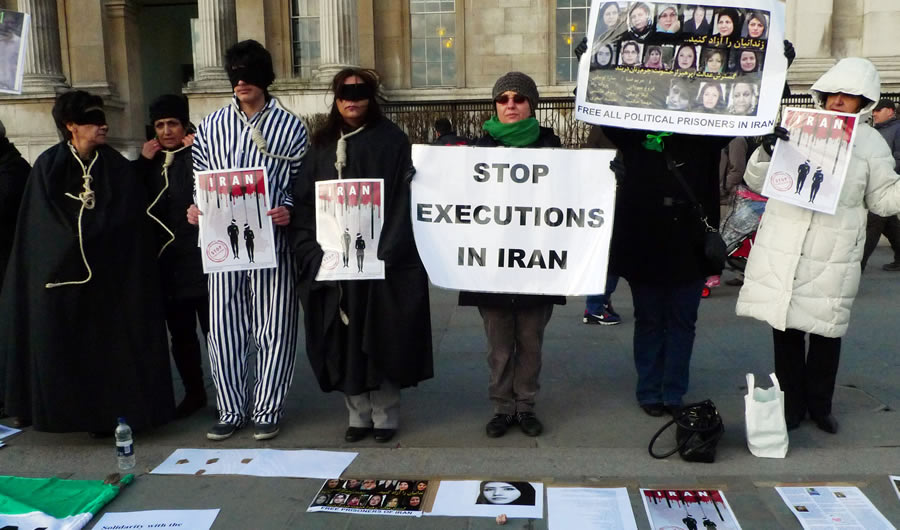 by Omid Memarian – After a full year of efforts by Iran’s human rights diplomats to discredit or ignore the mandate of Special Rapporteur on human rights in Iran Ahmed Shaheed, 22 members of the United Nations Human Rights Council voted to renew the mandate for another year on March 22.

Shaheed’s insistence on tackling extensive issues pertaining to the systematic violations of human rights in Iran neutralized Tehran’s strategy of denial, deflection, discrediting, and lack of cooperation with the UN. In addition, the votes Shaheed collected from council members led to the unprecedented isolation of the Islamic Republic of Iran within the UN, the political consequences of which go far beyond the Human Rights Council.

The Iranian team, led by Mohammad Javad Larijani, head of the Iranian Judiciary’s human rights council, was left to console itself with 5 nay votes and 20 abstentions.

One year ago, the Human Rights Council angered Iranian authorities by creating a special procedure for the review of the situation of human rights in Iran and appointing a Special Rapporteur. During the past year, despite his repeated requests, Shaheed was unable to receive permission to enter Iran. He did, however, fulfill the commitment stipulated in his mandate by presenting two reports.

Extending Shaheed’s mandate puts Iran’s diplomacy in a very difficult position after
Larijani called him “stupid” during a television program on IRIB, having called him “biased” and “ignorant” during a council meeting two weeks earlier.

Considered one of the most experienced Iranian diplomats, Larijani has been the leader of the Islamic Republic’s human rights project at an international level, and for this reason he has been largely responsible for the existing confrontation with United Nations and its member states.

The question now arises whether, especially after the intensified and extended violations of human rights that followed the 2009 disputed presidential election, Larijani’s decisions and strategies have ended his mission inside the Iranian Judiciary.

The Angry Diplomat and the “Zionist Mafia”

Those who know Javad Larijani personally do not describe him as an angry man. But during Ahmed Shaheed’s presentation of his report, the 61-year-old, Najaf-born diplomat appeared so outraged that the head of the session had to cut off his microphone and remind him to respect the meeting. This unprecedented action showed that he was not at all satisfied with the way the human rights case was managed.

In fact, the text of Larijani’s presentation, which was distributed to the audience, was vastly different from what he said at the meeting, a subject that astonished many. This discrepancy may portend the end of Larijani’s leadership.

Larijani called Shaheed’s and the Secretary General’s reports “a new phenomenon” that is a result of the “United States of America and … Zionist mafia.” Such choice of language by Larijani, who on the one hand talked about cooperating with UN mechanisms and on the other questioned the UN decision-making system, in effect showed the confusion in the Iranian delegation’s thinking and decision-making process.

Observers of the negotiations noted that Larijani’s refusal of accountability for the points raised in UN resolutions against Iran and his verbal attacks on the council seriously compromised Iran’s stature in this area of the UN, and therefore Larijani’s very position as head of Iran’s Human Rights Delegation.

Larijani has a reputation as “the negotiator,” as exemplified by his famous quote that he would “negotiate with the devil in the depths of hell for the regime’s interests.” Therefore, his appointment as head of Iran’s Human Rights Council fueled speculation that a closer relationship would emerge between UN human rights mechanisms and the Iranian Judiciary, and that objections to the conditions of human rights in Iran would decrease through the presence of UN authorities and reporters.

Of course, the widespread arrests of political activists and violations of Iranian citizens’ basic rights that followed the 2009 election engendered very difficult conditions for Larijani to defend Iran’s human rights record, and the multiple UN resolutions against Iran only exacerbated his problem.

A review of Iran’s human rights diplomacy over the past two years indicates that its strategy was based on four main tactics.

First, consistently speak of cooperating with the United Nations, but simultaneously prevent UN reporters from achieving their missions in Iran and refuse to answer their questions properly.

Second, characterize every effort to discuss the subject of human rights in Iran, including efforts to issue resolutions or to appoint a special rapporteur, as backed by Western countries, and call every such action political, thereby evading accountability for any questions raised.

Third, express Iran’s dedication to thematic mandate-holders or the Universal Periodic Review (UPR), instead of providing answers about specific cases or sensitive trends regarding topics raised by the Special Rapporteur, such as executions, torture, and arbitrary arrests. (This despite the fact that no thematic rapporteurs have traveled to Iran since 2005 and of the 126 recommendations accepted during Iran’s UPR, very few have been addressed seriously.)

And fourth, refuse to allow the Special Rapporteur on human rights to enter the country, and question his sources and the credibility of his report precisely because it was prepared outside the country.

Iran’s Parliament and its government media and organizations carried out these tactics, set by the Iranian Judiciary, in unison.

But statistics and numbers pertaining to Iran’s cooperation with the UN emerged in stark contrast to the statements of Iranian authorities. During the past two years, Larijani has repeatedly said that he has invited UN High Commissioner on Human Rights Navi Pillay to travel to Iran, pointing to the invitation as an indication of Iran’s willingness to cooperate with UN human rights mechanisms. Though the invitation was made, Iran did not cooperate in providing the requirements for the trip. In item 44 of his March 20 report, Secretary General Ban Ki-moon describes this topic in detail.

In fact, in preparation for her visit, High Commissioner Pillay sent a delegation to Tehran. According to Ban Ki-moon’s report, they advised the Iranian government during their trip that the High Commissioner will travel to Tehran only when she is allowed to visit with the opposition leaders (Mir Hossein Mousavi, Mehdi Karroubi, and Zahra Rahnavard) who are currently under house arrest, as well as certain political prisoners and independent civil society activists. Unwilling to oblige these requests, the Iranian authorities decided to forgo the visit.

According to item 42 of the Secretary General’s report, UN rights bodies communicated 17 questions to Iranian authorities in 2011, one of which was answered.

Iran’s lack of cooperation with UN human rights mechanisms did not go unnoticed by other countries, and even without the political nature of UN voting this point alone would have sufficed to renew Special Rapporteur Shaheed’s mandate.

Calling the passed resolutions “American” and attributing them to what Larijani called the “Zionist mafia” was an act of self-sabotage, as were attacking the United Nations while inside the United Nations and disrespecting and questioning other countries’ independence in their decision-making.

These strategies backfired and in effect failed to convince any additional countries to oppose the resolution or the renewal of Shaheed’s mandate.

Larijani’s final and unsuccessful effort to refute Ahmed Shaheed’s report, much like his first one, was to discredit the testimonials, documents, and cases described in the report.

A Late Response, a Futile Effort

Ahmed Shaheed began collecting data, conducting interviews, and writing his second report in October 2011. He sent the report to Tehran in early January 2012, so that Iranian authorities could state their opinions about each of the points raised. He interviewed more than 160 victims of violations of human rights for his reports. Iranian authorities had close to two months to respond to every item in Shaheed’s annual report. But instead, Iran decided to attack both the report and the Special Rapporteur.

The Special Rapporteur spoke directly with more than 160 individuals and their families, both in Iran and abroad. Many of these individuals provided him with first-hand documents. The UN Human Rights apparatus has a high degree of confidence in the quality of the report, the accuracy of the statements, and the validity of the concerns raised.

Therefore, when Iran opted to issue verbal attacks and refuse to cooperate with various UN rights bodies instead of responding to the issues raised, the member states of the council and other UN authorities determined that only renewing Shaheed’s mandate would keep Iran’s human rights crisis in the spotlight.

Despite consistent denials of the findings of the Special Rapporteur’s report, Larijani brought a 27-page report with him to Geneva. Though this report only addresses a very small number of the cases mentioned in Shaheed’s report, its preparation indicates that even the Iranian diplomatic delegation concluded that an empty-handed appearance at the council would weaken them. They did not submit the response within the stipulated time; it was handed to Shaheed and the Human Rights Council after Larijani’s arrival. Iran’s responses about some of the cases, such as students banned from continuing their education, whose existence Tehran has entirely denied, clearly go against all documents and evidence in that area. In some cases, the Iranian government’s report even contradicts court documents about some political prisoners.

It is not clear what body determines the Islamic Republic of Iran’s main policies about human rights and cooperation with international organizations: the Iranian Judiciary, its Ministry of Intelligence, the Intelligence Unit of the IRGC, or even the Supreme Leader’s organization. But Larijani’s placement as head of the Judiciary’s human rights council makes him Iran’s top diplomacy figure in charge of explaining Iran’s policies and conduct vis-à-vis its observation of human rights standards. Especially considering his unusual behavior during the recent Human Rights Council meeting, this indicates that Iran’s offensive and denial-oriented diplomacy has not only proved ineffective, it has also mobilized a large consensus against the Islamic Republic.

Considering Larijani’s inability to build coalitions with other UN member states and in view of his aggressive conduct, expecting him and his team to effect changes in Iran’s standing within the UN appears highly unlikely. Any changes in how Iran cooperates with the UN and different human rights mechanisms seem improbable, considering the Iranian authorities’ stances towards the issues and the domination of intelligence organizations over the Iranian Judiciary.

Diplomatic norms dictate that when a mission proves fruitless or when the existing state of affairs deteriorates, the first step towards changing the situation and ending the crisis is to replace the diplomatic team.

Over the past few months, especially during the recent Human Rights Council meeting, Javad Larijani has directed words and allegations against the UN and its member states, making it very difficult for him to have an impact on Iran’s human rights case in the future. It would therefore not be unexpected for him to be replaced in the coming weeks.

Continuing the current standstill could pave the way for Iran’s case to be forwarded to the Security Council or even international courts. This represents the ultimate nightmare for those Iranian authorities who violate human rights.

This piece was originally published in Persian by BBC Persian.